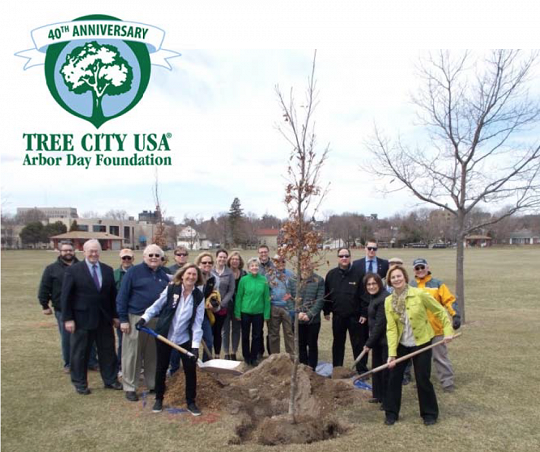 On April 27, 2018 the City of Sheboygan will be celebrating Arbor Day like many communities in the United States. This year will be a special celebration for Sheboygan because the city will be receiving Wisconsin’s first 40-year Tree City USA recognition. That means Sheboygan was the first Wisconsin community to meet the guidelines set by the Arbor Day Foundation and has continually cared for the community’s trees for 40 straight years!

This year the Arbor Day Program at Deland Park on Friday, April 27 at 10:30 am will be shared with the Sheboygan Area Rotary Clubs. The Sheboygan Early Bird Rotary Club and the Sheboygan Rotary Club are supporting the City of Sheboygan’s tree restoration program and meeting the “one tree planted per Rotarian” goal established by Rotary International for 2017-2018.

It is partnerships like this that are needed more than ever, since the city is in the middle years of losing all its ash trees due to the Emerald Ash Borer (EAB). Funds donated will help to support the planting of trees in our Sheboygan community that have been impacted by the EAB. Donations to support the Rotary Tree Project can be sent to Sheboygan Rotary Club, P.O. Box 1172, Sheboygan, WI 53082-1172. Checks can be made out to Sheboygan County Rotary Foundation, with “Tree Project” in the memo area.

The Urban Forest of Sheboygan provides a multitude of aesthetic, economical, and environmental benefits to citizens, businesses, and visitors alike. In 2015, the city received a $21,900 Wisconsin DNR Urban Forestry grant to prepare an urban forestry management plan with an EAB component, conduct a tree planting site inventory, and purchase tree inventory software. The City of Sheboygan has a total of 22,154 street trees, 23 percent (5,139) of the trees are ash trees and susceptible to EAB infestation.

In 2016 the City of Sheboygan finished and accepted its first Urban Forestry Management Plan. It came just in time because the EAB was also discovered in the city in the spring of 2016. You can now see the affect that it is having on the ash trees especially on the south side. The City Department of Public Works started treating ash trees to control infestation and also started removing others. Planting of a variety of tree species is priority in the management plan. The city has approximately 4,500 street ash trees that need to be treated or removed over the next few years.

In 2017 the city received two tree planting grants, one for $25,000 from the Wisconsin DNR and a $10,000 Bay-Lakes Regional Planning Commission EAB Mitigation Grant. The city also funded the replacement of 60 trees in the South Pier area with funding from Tax Increment District #6. There were a total of 448 trees planted last year, versus 26 trees planted in 2016.

There are three options available to a community: (1) remove all ash trees from the public forest, (2) save all the ash trees through the use of chemical treatments, or (3) the recommended option to remove only the ash trees that have a trunk diameter of 12 inches or less and chemically treat the desirable ash trees that have a trunk diameter that is greater than 12 inches and in good health. The third choice is what the City of Sheboygan has done since it allows full growth ash trees to continue to be a component of the urban forest and it reduces the high initial cost of removing these trees.

If you have an ash tree on your property, you need to decide NOW what to do with it. Your options are to treat it or remove it. Remember, when hiring a tree company to perform work in the city, they need to have a city permit showing that have been approved to be able to do tree work in the city. Make sure you ask them to show you their permit.